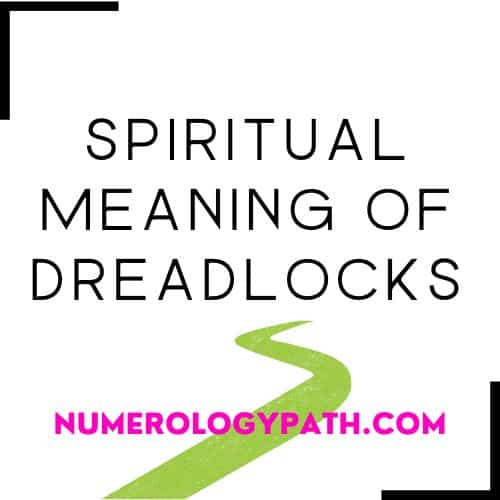 Dreadlocks are beautiful hairdos that look different from the norm. You may have been admiring locs and wondered about their origin. In this article, you are in for an intriguing journey into the world of dreadlocks and all it stands for in cultures worldwide.

This hairdo is not just beautiful, but the spiritual meaning of dreadlocks sets it apart from all other fashion hairstyles, as it takes you closer to the universe and Mother Nature.

In different parts of the world, dreadlocks go by several nicknames, including locs, locks, dreads, jaTaa, jatta, notty’s, and palu. These all come as contributions of the cultures entwined with the hairdo. No one culture can own dreadlocks, as it has a place in all parts of the world.

In ancient Egypt, mummies were excavated with hairs that closely resembled dreads. History has it that Queen Twosret, an eccentric pharaoh, wore dreads. She lived between 1292 and 1189 B.C.

The ancient Egyptians believed that dreads contained power and protection. So, royalties wore dread as a depiction of strength and good luck.

Interestingly, there is a dreadlock story in every culture, so let us dig in:

In India, the Hindu men who practiced “jaTA” first wore dreadlocks. jaTa means tangled or matted in Hindi, and these men began wearing dreads after going on a self-imposed exile into the desert of Rajasthan.

In China, the upper class wore dreadlocks to symbolize power and good health. Also, those in religious seclusion wore their hair as locks to signify purity and consecration.

Archeologists have found sculptures of Spartan magistrates that sport dreadlocks, following the ancient Greek culture. They had long braided locks, which they kept untouched and matted. This was also the practice of the Aztec priests and Israelite men.

In biblical times, we believe that the Nazarites kept their hair in locks as well, as God prohibited them from cutting it.

Some drawings and paintings of the Minoan people who lived in Crete showed that they kept dreads as their cultural hairdo. These people lived about 3600 years ago and perhaps associated dreadlocks with spiritual awareness.

In Namibia, women often wore locks to show fertility and the ability to bear children. It was believed that the length of their dreads determined their fertility. So, they took their time to tend their dreads and grow their length.

The Maasai warriors of Tanzania and Kenya often wore their hair as locks to signify power and strength against enemies. It is possible that this was a symbol of pride and indifference to the British soldiers. These soldiers were fierce and fought to preserve their tribe and culture from infiltration. This way, they preserved their tribe from pollution with strange beliefs and education.

At the onset of the industrial revolution, dreadlocks were only famous in India. This changed in the twentieth century when Marcus Garvey, a Jamaican, began a socio-religious moment in Harlem, New York. This gained popularity with the Africans and Jamaicans in the city and its surroundings.

After a while, these people started to follow the teachings of Haile Selassie, the Ethiopian Emperor Ras Tafari, and made the dreadlocks their official hairdo. They coined the name “dreadlocks” for this hairdo. Yet, dreadlocks did not originate from the Rastafarians but existed long before they did.

According to the Rastafarians, the dreadlocks remind them that the hair on their heads is numbered. This teaches them to live daily by being good to others and performing righteous acts.

Most people that carry dreads belong to a sect or religious system. These usually believe in letting go of their earthly cares and focusing on helping the world to achieve a common goal. They rely on the universe and divine guardians to lead them on a higher journey to become one with their subconscious minds.

They have a more profound understanding of the universe around them and all that it stands for. There is no bias or self-serving interest in these people. Therefore, it is more than the hairdo, as they choose to live a sacrificial lifestyle.

Dreadlocks can connect the wearers to their psychic energy. When you keep your dreads clean, and in good shape, there is an easy flow of energy from your subconscious into your physical space. This gives a unique and mighty aura that surrounds you like a cloak and commands respect and positive energy.

You can change and recreate your destiny and personality with such a presence. You can have an endless depth of wisdom and purity flow from you. So, dreads are so much more than a hairdo. They carry life and health, and goodwill.

3. Breaking Out of the Norm

Most people would associate dreadlocks with rebellion and stubbornness. Yet, another angle to this is that the world is ever evolving. Those who want to create new paths and walk fresh ways must break out of the typical patterns.

Those that wear dreadlocks are always different from the crowd. The spiritual meaning of dreadlocks is that you can never grow when you limit yourself to the norm. The Rastafarians would tell you to make every day count as you journey through the earth. This means you should continuously seek growth and expansion of your mind and heart to accept new beginnings and fresh starts.

This also implies that you should be accommodating and learn to accept people with flaws. The dreadlocks are each unique braids or twists, but they come together beautifully to make the complete hairdo. Accepting that each individual is unique helps you benefit from all the person brings to the circle.

When one has full locks, they achieve a high awareness of their physical and spiritual environment. These people usually have kinky dread curls and have a mindset that rises above average. The locks represent all the self-deprecating habits you are breaking loose from and aiming for growth. These give room for physical, emotional, spiritual, and mental evolution.

These also separate you from the care of your peers and the pressure to impress others. This way, you are authentic in all you do and get excellent results for your labor.

The Jamaicans wore dreadlocks as a sign of freedom when they gained emancipation, and it signified the restoration of dignity and resistance to their enslavers. The spiritual meaning of dreadlocks is that there is freedom from the pressing cares of the world. It is a sign of hope and certainty of a better way of life, away from life’s rat race.

Regardless of the region or cultural attachments, many who keep locs do so because they keep a covenant with God (or any divine being they believe). So, beyond the looks and fashion, there is usually a spiritual meaning in dreadlocks for anyone wearing it.

Understanding that you cannot determine a person’s reason for wearing locs using your beliefs or views bias. A mind that accepts and respects people’s choices and beliefs is a necessary asset when dealing with them.

Therefore, the next time you see anyone with dreadlocks, do not be obnoxious or judge them based on looks. Instead, ask polite questions, and learn from the universe, its mind, and goodwill towards you.

What does it mean when you have dreadlocks?

There are several meanings to carrying dreadlocks. A few percent of people only wear this as a protective hairdo and have no spiritual attachment to their locs or looks. Yet, most lock wearers have dreadlocks as a symbol of worship or spiritual intimacy.

To many, it symbolizes separation from earthly cares and abandonment of physical needs to find higher purpose through introspection and meditation. This is a usual sign of higher purpose and enlightenment. The dreadlocks open these people to realms and dimensions of a higher calling.

What is the meaning of Rastafari dreadlocks?

The Rastafarians have deep respect for their god. They show this by keeping the dreadlocks to represent their awe of the Lion of Judah. They coined the name “Dreadlocks” for this hairdo. Yet, the hairdo was present long before the religious movement began. Therefore, they did not invent dreadlocks, although it is their official hairdo.

Several religious movements and cultures have accepted the dreadlocks as part of their symbols, which could hold several spiritual meanings in each of these cultures.

What does it mean to have Tibetan dreadlocks?

The Tibetan Buddhists believe that the body is sacred and must remain pure without modifications or vanity. So, they keep their hair, mind, body, and appearance unaltered and uncut as they seek to be one with the universe and attain high levels of spiritual enlightenment.

What is the connection between religion and dreadlocks?

From the onset of this hairdo, it has been connected with religion and spirituality. The people in ancient times wore dreadlocks as a sign of power, strength, and wisdom. They were of high caste and included pharaohs, magistrates, gurus, and elders.

In these times, dreadlocks represent a deep spiritual calling and a need for self-denial. Most people that wear dreads have a covenant with the deity they serve. They keep their hair as locks to honor the deity and consecrate themselves.

In summary, the dreadlocks hold deep spiritual meanings that the universe explains to each wearer of the hairdo. And because the universe is dynamic, it speaks a unique language to every one of its inhabitants. Understanding your messages will help guide you through your life’s journey as you reach for your purpose.