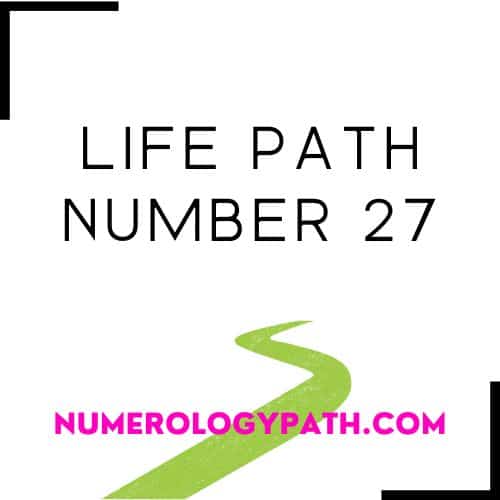 Life Path Number 27 is a special number that focuses on selflessness and spirituality. These individuals have the ability to understand and communicate their feelings more than other individuals.

Read on to learn more on life path number 27 including its purpose, compatibility and careers, and some of the positive and negative traits these people deal with.

What Does Life Path Number 27 Mean?

Life path number 27 is a unique mixture of the three numbers within the digit. This results in someone who is highly selfless but also highly spiritual. Their deep kindness is etched into their very being, and they have a lightness when dealing with them.

They are very friendly and end up being in professions that allow them to work with many people.

They’re also very spiritual people and have a keen awareness not only of how they feel and interact with the world but also of higher powers. They may be very susceptible to those around them or energy changes.

However, this also makes them very thoughtful and empathetic, so they’re very good at talking to different people and understanding them.

One of the primary purposes of a life path 27 is to be a teacher. This can be in the traditional academic sense, but it can also be through motivational speaking or entrepreneurship. They may even choose to tutor or apprentice someone. This also means that they are seekers of knowledge and new experiences.

Another one of their life purposes is to have a spiritual awakening where they fully realize their true selves. This is because the number 7 is in their life path, which is about spiritual enlightenment.

This makes them also very open-minded to different kinds of topics and belief systems which they’re sure to pick up from their interactions with lots of other people.

Life path number 27s may have their ups and downs with romantic relationships because as they become more spiritually aware of who they are, they may start to re-evaluate their relationships. This doesn’t mean that they aren’t willing to put in the work and adjust to accommodate their spiritual beliefs and the feelings of those around them.

However, the number 27 also includes the number 2, which is all about Harmony in relationships.

They’re highly skilled at maneuvering conversations with lots of different people, so if some argument arises in their romantic relationships, they will be able to communicate how they’re feeling and empathize with their partner’s feelings.

Life path 27s do well in careers that allow them to teach in some capacity. This can be entrepreneurship, or it can be in an academic setting. It can even be management since this will enable them to teach new employees the ropes and Implement new processes that can help others.

They also make fantastic artists, from painters to musicians to actors to writers. They like to have a creative outlet in their careers, whether in the literal sense like the examples above or in a more subtle sense where they can creatively solve problems.

Working 27 in the Positive?

Life path number 27s have a lot of introspection and can translate their thoughts and feelings through creative outlets. This means that it’s easier for them to communicate their sense with different kinds of people regardless of their varying backgrounds.

They have a high sense of spirituality, meaning they tend to be very connected with themselves and the world around them. They may come off as a little odd to some of those around them, but they stand firm in their beliefs and aren’t easily swayed by others.

Working 27 in the Negative?

Due to life path number 27s being so introspective, they can sometimes get lost in their head in the spiritual realm and forget to ground themselves in the 3D.

This means that sometimes they aren’t always aware of their actions or lack thereof impact those around them. Having a support group who can check in with them is paramount.

On the flip side, life path 27s can sometimes forget to care for themselves because they are so focused on educating and helping others. This is because they try to give as much as they possibly can, but that sometimes means that they aren’t meeting their own needs to find fulfillment and joy.

Life path 27 people are very spiritual and introspective. This means they’re very good at understanding others and communicating their feelings, making them outstanding teachers and humanitarians.

However, it can also mean that sometimes they get a little bit too stuck in their introspection or helping others that they forget to take care of themselves. Having solid friendships and relationships can help balance them out.

What is special about the number 27?

The number 27 is special because it is the only positive integer three times the sum of its digits.

Is 27 an auspicious number?

When you add 2 + 7 together, you get the number 9, which is associated with Mars and represents karma, education, spiritual knowledge, and justice. It is also auspicious because it is associated with those with fame and splendor.