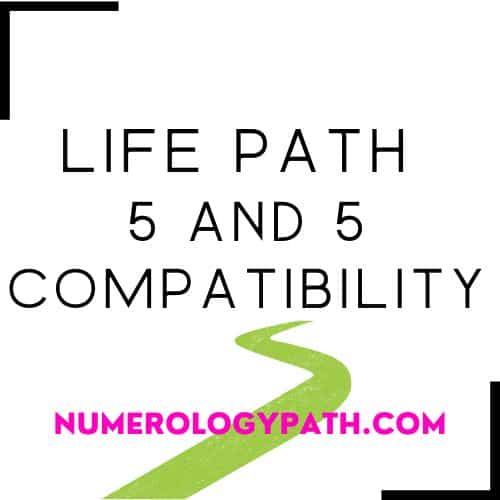 As a person delving into the world of numerology, you may want to find out why that person in your family never seems to be out of energy. Or you may know another number 5 and are curious to understand the degree of compatibility between you two.

Life paths five are generally outgoing people who like to embrace change in their lives.

What does life path 5 mean?

Since change is such an important part of their lives, it is important for them to have the space to change.

Life path number 5 is usually very open about what they feel and can make changes to their behavior according to the environment, making it easier for them to adjust to any circumstances without much difficulty. At the same time, they can easily become restless in the same place, so it is important for them to keep moving around.

They like to experience new things as this is how they can achieve true happiness. Plus, they’re often not very fascinated with the tried and tested approaches to doing things.

Life path 5 is a person with a lot of resourcefulness and they believe in taking life head-on. They focus on being themselves all of the time and take comfort in it.

Life path 5 can change and mold their outward appearance, both in terms of physicality and speech, as the environment changes. Because of this ability, they are very well-equipped to be able to fit in anywhere.

They are outgoing and restless social people. In fact, they cannot just unwind and sit down as they won’t know what to do with all their energy.

Since these two have such similar thinking patterns, it will be quite easy for each of them to understand the other without actually saying much. This can be an especially valuable asset in any sort of relationship dynamic.

The most important thing here is for both of them to clearly define their roles early on, especially about their expectations as they get further into the relationship.

However, there can be a clash if both number 5s are looking for different things in life. One of them might be in a different mental space, thinking of something more long-term, while the other may think of the relationship as something purely experimental.

If they can get ahead of this possible dynamic, it can be refreshing for life path 5 to know that there is someone who has their back in the things that they want to do or try because crave the same experiences.

Working life path 5 and 5 in the positive

Social interactions can be a breeze for life path 5 to deal with since they become spontaneous and complement one another in representing the free spirit that they have always held so close to their hearts.

In a social environment, life path 5 will encourage other people to embrace how they feel as a person and preach the same philosophy that they themselves take on a regular basis.

In a professional setting, they can come up with innovative ideas together and adapt quickly to the dynamic environment.

At the end of the day, this can be comforting for both as each will have someone to fall back on. Since each of them likes change so much, they can then start to show this in whatever they do; travel frequently, have adventures, and hardly ever settle.

Working life path 5 and 5 in the negative

If there is a lack of communication and roles have not been clearly defined between the two, they could end up feeling like the relationship is not enough. In this scenario, their constant drive to ask for change may end up being a deal breaker between them.

They may end up wanting to try new things constantly. The problem arises when they keep making the same kind of mistakes in the hopes of changing it up. This can be dangerous especially if they’re on a wild streak and get into drugs or other vices.

It is up to number 5 to decide how they intend to replace this hunger. In certain situations, 5s must realize that it is time to change their ways. It is quite ironic in the sense that even though change is such an important and integral part of their personalities, this one change can be especially tricky for them to commit to.

Since the two are so similar, they will be able to view the world in a similar light. Because of this, it is likely that they may find peace with one another. Constant change all around them except for each other, if they are able to establish this kind of dynamic, can be quite successful in terms of the relationship.

The main thing to do is, replace the constant need for change when it comes to the relationship because that won’t always end well. Other than that, they’re very well suited for each other.

What are the best careers for life path number 5?

Any activity that involves freedom and the ability to express is a good idea for life path 5. This can include freelancing, journalism, and travel guiding.

What does life path 5 mean spiritually?

People from this life path understand that change is the most constant factor in life. They are often welcoming of change and believe in constant growth through movement.

Which life path numbers are best for long-term relationships?

Life path 5 and life path 7 are generally very good for each other and have a high chance of having a long-term relationship. They have the ability to allow one another to grow in whatever way they want.